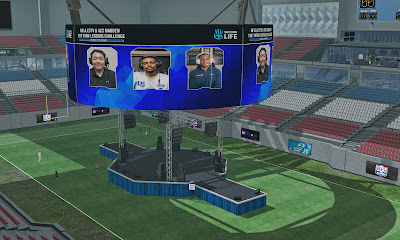 This Sunday will be the Superbowl, the championship game each year for the American football season. On the official Second Life blog yesterday, it was more or less stated that there'd be an official event here in Second Life for it. On Thursday February 4, they announced an "NFL Alumni Association Virtual Experience" or NFLAVX. The location this takes place at is the "NFL Alumni Association stadium."

Just in time for the big game! The NFL Alumni Association has established an all-new presence in Second Life that includes a massive multi-region virtual stadium that will be used for several live events including concerts, player appearances and charitable initiatives.

“Sports fans from around the world can hang out, chat and attend events together in Second Life across thousands of immersive virtual world experiences including this all-new virtual stadium built exclusively for this event,” says Linden Lab CEO Ebbe Altberg.

According the Lab, "several members of the Second Life music community are performing at virtual halftime shows" at the “Madden 'The Yard' Celebrity Challenge." The event is described as "a multi-day charity event" for "Gamers vs Cancer," a fundraiser for the American Cancer society. "The event airs daily at noon through Saturday on ESTV, a 24-7 live linear video channel dedicated to esports that is available across multiple streaming outlets including Roku Channel, Amazon Fire TV and social channels." For those in the stadium, the stream can also be seen on screens over the center of the field.

I decided to take a short peek at the stadium myself (via an alt). It's located in the middle of four sims, NFLA 1, NFLA 2, NFLA 3, and NFLA 4. The map showed an unnamed and not accessible fifth sim. Going inside, the outer ring showed small restaurant areas and what looked like t-shirt display areas. But none of the latter were available for sale. The interior was a huge seating area, with the field set up for a halftime show.

The Lab says future expansions are planned for the stadium grounds, including a museum area later this year. The NFLAVX also has a website (here).

For more information, check out the blog entry Here.

Posted by Bixyl Shuftan at 8:01 PM