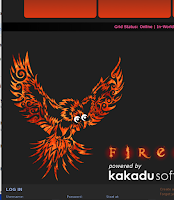 As it had for the previous nine years, the Second Life Newser posted a gag article. One reader felt we went slightly too far. But I also overheard plenty of compliments. One commented it was the scariest April Fool since the joke about Disney buying the virtual world a few years ago.

But as far as Second Life goes, that was just the start of the April Foolery.

Team Firestorm got in on the act. At one point in the day they gave their logo on their viewer "googly eyes."

Linden Lab also got into the act. On the Second Life Blog, they announced two "Limited Edition" last names.

In appreciation of our Anthro/Furry community in Second Life, we are releasing two new limited edition last names today, only available until April 8th:
UwU
OwO

Checking the "Change Name" page, it appears the option is a real one. Someone on the Second Life forums also stated they saw two others use it.

But this gag last name wasn't the end. On the Second Life Flickr, there was a picture of four tenement apartment buildings.

Come get a sneak peek at our new theme for Linden Homes, on the Millbank region in #SecondLife - just for today!

Checking the Millbank sim at with an alt, the apartment buildings were there. They also had a number of old Soviet Propaganda posters. finding the parking garage entrance, there were no stairs, just "The People's Great and Glorious Elevator." But stepping inside, I ended shot up to the top, falling down, and once I got back up shot up once more. Moving around, I finally managed to get into the top floor. There were a number of markers around to point out where to place objects. On top of the building was a LDPW helicopter.

So why the Soviet theme? Maybe this was a dig at the "Woodburry" griefers of years ago whom occasionally pretended to be Communists.

Run of the mill residents got in on the act as well. Yours truly overheard a singer say to her fans that Linden Lab was asking residents to wear masks, stating it was a way to encourage people in real life to do so.

So despite that things have been rough over the past year with lots of tragedy, April Fools Day is alive and well. And the Lab isn't afraid to get in on it.

Editor's Note: Just how does one pronounce "UwU" and "OwO"?