Jaycatt and Frogg at The Shelter 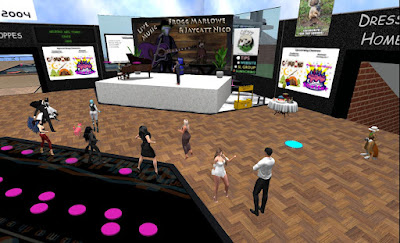 At 6PM on Friday August 20, "The Shelter" was the scene of a music event by noted live musicians Jaycatt Nico and Frogg Marlowe. Frogg, who used to appear as an anthro amphibian, was now human, though still shoeless. Jaycatt was still the cat behind the piano. They played songs such as "Apateure Science," while cake and other goodies were available nearby.

The Shelter, located at at Isabel (44/244/79), was a noted hangout for newcomers from 2004 to August 2020 when it's leadership announced they could no longer continue running it.  After that, it was turned over to Linden Lab.