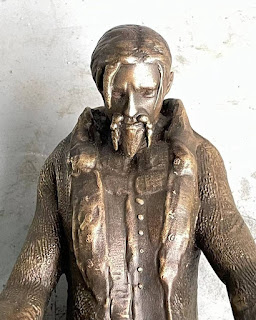 Second Life artis Bryn Oh has been known for various artistic displays in Second Life, such as her Rabbicorn. But she has also been doing some real life art, such as the bronze sculptures she made in 2017.  Recently in Facebook, Bryn announced she had been doing more bronze statue art. But this time, it was Linden Lab itself that requested the sculpture, in honor of Oz Linden, whom had retired in February this year after 11 years.

Several months ago I was approached by Linden Lab, the makers of the virtual world I use for my art,  to create a retirement gift for Oz Linden a long time and very well known Linden Lab employee.  They asked me to create a bronze sculpture of his avatar.

Bryn used a couple of images of Oz from the 2019 interview of him an April Linden (though mistook April as the one doing the interviewing). The resulting sculpture was 12 inches high, and was slumped forward in the style of an AFK avatar. 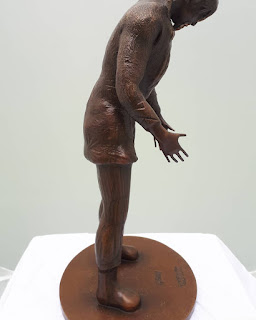 I created a 12 inch sculpture of Oz and it is being shipped to Linden Lab right now so yay.  When creating the pose for the sculpture I decided to make Oz in an "away" pose.   An away pose is unique to the virtual world in that when a person doesn't touch their keyboard for a while because they have gone to make tea or went to walk the dog.. their avatar will time out and be put in the "away" pose which is slumped over and asleep looking.

So why put Oz in this particular pose? Bryn would explain with the following:

I felt it was nice to make Oz in "away" because maybe retirement its more of an adieu than a goodbye.  Or maybe I am just too sentimental.

So the scuplture was made in a way that expressed a wish that Oz wasn't really gone, just having stepped away for a while to return later.