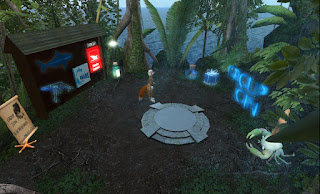 A well-done underwater sim will soon be closing. In the Safe Waters Foundation group, it was announced Shark's Bay would soon be shutting down. The sim belongs to Saer Genossee.

The sim and the group for Sharks Bay will be closing on Friday, August 27th.

We know this happens a lot in SL but are so greatly saddened and send our condolences to Saer Genossee - she is an incredible builder and a huge contributor to SWF group and lands. Please go now if you want to see her work! 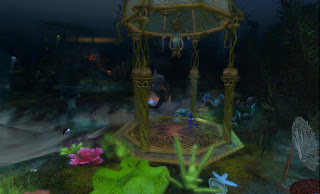 Dropping by the landmark provided at Sunshine Island (20/30/37), I appeared on a small island. There was a group joiner, and a free gift of a light ans a snorkel.  On the other side of the sim was a floating patio with a couple of lounge chairs made from shark jaws. But the real treat is underwater. There was an underwater gazebo, underwater kelp forests, an underwater lava flow of a small island building itself up and about to form, and numerous critters swimming about from whales, sea snakes, turtles, and of course sharks. 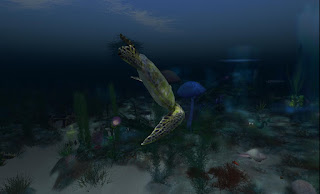 The background music is relaxing, gentle tunes. If you're observant, you can hear whale calls as well. Be careful about approaching some of the fish. While panning around, a sea snake swam over and nipped me, and I had to leave the sim to get medical treatment. Later on, I would hear the "killers" had their instinct to bite turned off.

Once again, baring the owner getting enough money to keep it going longer, the sim will be closing down Friday August 27.