Breaking News: Gachas To Be Banned in Second Life

A popular way of selling items in Second Life is coming to an end.

In the official blog today, Linden Lab announced that it will soon be banning sales through gacha machines in Second Life. The reason given was "Due to a changing regulatory climate."

Due to a changing regulatory climate, we’ve had to make the difficult decision to sunset a very popular sales mechanism for content in Second Life.  It’s widely known as "gacha", and is defined by a chance-based outcome as a result of a payment.

We know that creators plan their content releases far in advance and will need to re-tool their products, so to mitigate the impact to those affected, we are giving a 30-day grace period, until midnight SLT on August 31.  After that time, selling content via gacha machines will no longer be permitted in Second Life.  Enforcement won’t start until September 1; after that date an Abuse Report for “Gaming Policy Violation” will be the preferred method of reporting this content to Linden Lab.

We will continue to allow any sales where a payment is given for a known item, which means that items that had been purchased as “gacha” will be allowed to be re-sold as long as the buyer knows in advance the item and quantity they will receive. We will, of course, still allow fatpacks, and any other currently-allowed distribution mechanisms.

We did not make this decision lightly and we understand that it will impact creators as well as event organizers and certainly the shoppers! We look forward to fun creative ways of engagement that will come instead. 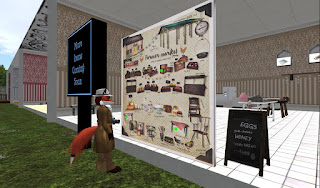 Probably most familiar with shopping in Second Life knows about gachas. Based on Japanese gashapon games, they've become very popular in Second Life. The way it works is a machine gives one of a number of items listed at random, often with one or more listed as uncommon or rare. Events such as the Arcade and the Gacha Guild have sprung up selling items through only gacha machines. While highly popular, this method of shopping has also been criticized, notably by those calling it a form of gambling.

The ban does not apply to the reselling of gacha items, which has also gotten a following in Second Life, with groups for the selling and trading of them.

This move will no doubt have a big impact on Second Life, as well as be the target of much criticism (and praise from gacha's critics).

The Lab created a thread on the forums about the upcoming ban and invited discussion, and already people are responding, both opposing the ban, supporting it, and asking questions.

Stay tuned for further developments on this big move by the Lab.