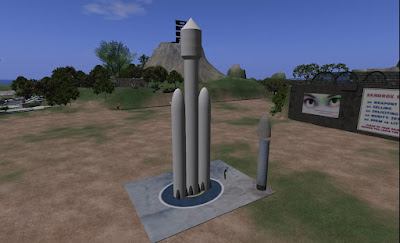 For space fans, there's a chance to get a rocket in Second Life. In the National Space Society group, someone posted about a new space-themed group: SpaceX.

I have great gifts from the Official SpaceX.com group I would love to give out today.
To receive them, join secondlife:///app/group/71d716fc-3bc3-159e-8c05-ddad966760fb/about
and check out the group notices.

Joining the group, it claimed to be the official SpaceX.com group in Second Life. It had a docking simulator on https://iss-sim.spacex.com . But checking the group notices, there were some gifts. One from Neuralinks that got my attention was a rezzable Falcon rocket. Once rezzed on the ground, board it, and the rocket would rise some feet in the air. Get out, and the rocket would come back down.

Other gifts include large pictures. There may be more gifts in the group in the future.