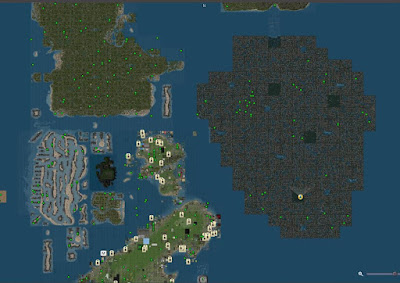 Near the beginning of the month, the subcontinent for the new Fantasy-themed Linden Homes had appeared off Bellisseria. Recently, the land was open to all, and the houses were available for those with Premium accounts to claim.

Dropping by, the place looked much like the display area showing the houses at the Second Life Birthday. the four types of houses were there. So were the trees, crystals, mushrooms, and other decorations, as were the bridges over the water. There was one notable difference. As the houses were now being claimed, some were being decorated for individual tastes with pets, statues, more lights, and other items. I had yet to hear about a community center of some kind. But this may change in the future.

On another note about news from the Linden Home continent, There's been a water park in the Bellisseria Fairgrounds, with pools, lounge chairs to enjoy the sun, and four tall slides that took close to a minute to go down into the water. Some wag also put a Bellisserian Slenderman doll in the water as a joke. But the fun didn't last forever, and last week it's closing was announced.

This week will be the final farewell to the water park. It's been an amazing summer and Vari and I would like to sincerely thank you all for your continued support of the Belli Animal Sanctuary and the Bellisseria Fairgrounds!

There were a few farewell events. But people continued to drop by afterwards to slide, or just to relax. But this isn't necessarily a permanent end. The water park may be back sometime in the future.