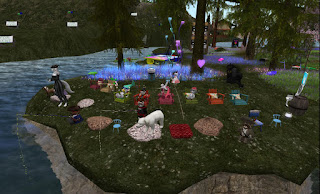 While the Sunweaver lands are best known to being home to a (mostly) furry community, there is one spot in the southwest corner of Sunweaver Space that's more tiny oriented: the Tiny Oasis. Owned by Skye Tracer, the place has two events a week. One is the Tuesday night dance. The other is a fishing contest every Wednesday. The event is hosted by Kitty Huang (SuperGirl1970 Carver).

With a few known regulars from Raglan Shire, the fishing can be whimsical, with various tiny-themed gestures played throughout the event. It's done using 7Seas equipment and contest board, with the current leaders of the event shown for all to see. There's at least two rounds per event. The contests have been going on for over a year, with Kitty only unable to run it twice.

I have yet to sit in on a contest, though have seen it from a distance. By the time I get there, it's pretty much wrapped up, with the fishers doing the tiny riverdance. By some coincidence, the radio stream was playing, "So Long And Thanks For All The Fish."