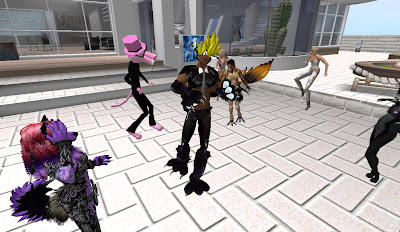 On Sunday Sept. 18th at 2PM, the FCA held a "housewarming party" for it's new HQ, intended as both the location of official meetings and a social hangout for staff and club regulars. But for the DJ providing the tunes for the party, FCA leader Nydia Tungsten reached out beyond the member clubs usual DJs, and Qwark Allen was picked as the music man. 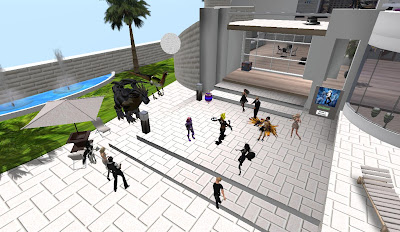 The FCA, made up of several different clubs, stands for "Furry Club Alliance." In the past, the group had simply been known as the club alliance. Not all of them are aimed at furred residents, and club owners have expressed a desire to attract a more diverse crowd.

DJ Qwark, the partner of Second Life Newser reporter Gemma Cleanslate, had been playing at "The Lighttower" on Sundays at this time, until the club closed down. Showing up at the party with a mostly furred audience, he donned a Pink Panther avatar. Some of his friends showing up did similar. And when Quark and others began changing into other avatars, the jokes began to flow, "Eeps! He turned into a T-Rex! Someone tip him before he bites someone! Or worse turns purple and starts singing kids music!" Not everyone danced. Some were checking out the pool and hot tub, and other places.

Qwark DJed for a few hours, his fans from the Lighttower and the FCA furries getting along fine. Eventually he left, and the party took on a more relaxed feel, more taking a dip in the hot tub while others continued to dance to the music or relax on chairs & swings.

Nydia, who owns Club Zero Gravity as well as being the FCA head, was impressed with the performance, and Qwark is currently scheduled to perform again next Sunday at 2PM at the space club.