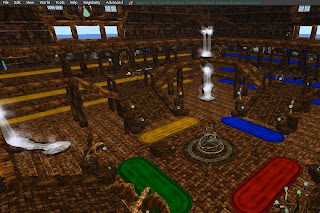 One of the more noted avatar stores in Second Life is “Grendel’s Children. The venue is well known for it’s selection of avatars and other goods at cheaper than usual prices. Some of the items have been discounted to near-free or freebies. One can come here and get a number of avies. Quoting Tateru Nino’s article in Massively:


There are things on sale here from Thrulls and Liches to Medusae and genetic horrors - and things I don't even know enough about to name. ... There are dragons, gryphons, drakes, spiders, scorpions, birds (legendary, mundane, gigantic, or plush), necromancers, shadow-mancers, plague monks, incubi, succubi, assorted demons and devils, trolls, fae, angels, imps (elemental, and paralegal), treants (all seasons), dryads, myconids, chelonians, molluscs, a certain famous yellow submarine, mermaids, goldfish, therapods, dinosaurs and mammoths, aliens, and Lord only knows what else. Lots and lots of what else.

The store was just part of the fun in the region. Below Grendel’s were four sims: Avaria, Avaria Tor (directly under the store), Avaria Kro, and Avaria Sav. There, residents could engage in roleplay (including some dinosaur RP that I witnessed). They could play games such as “Grungeboarding,” and a resource-gathering game Xymbers Slade showed me that the HUD would take materials gathered and would make them in to various processed goods and clothing. And of course they could explore the various caves and other hiding places.

Grendel’s has been around since 2006, and has its fifth anniversary today. Sept 1, 2006 was the date of the store’s founding. But unfortunately, Grendel’s fans have less to celebrate. The region is half what it used to be. 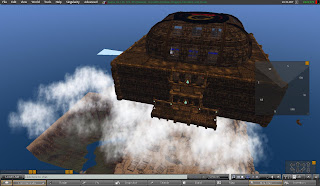 Prim Perfect reported on August 29th that two of the sims, Avaria Kro and Avaria Sav were sold. A look at the map shows them still there, but offline. Inworld, they are nowhere to be seen.Grendel’s made more than enough for the $14,400 they paid Linden Lab every year. Unfortunately, according to Grendels’ team, the Lab hasn’t been providing the technical support they paid for.


“I can get spam from Cafe Press, but no answers from Linden Lab,” says Flea Bussy, the leader janitor of Grendel’s (and owner of the Avarian sims) wearily. There is no response to his tickets, and having been told “we’ll call you back” by concierge, there are no replies. “They don’t care.” After years of patience with Linden Lab, Flea is disappointed in the failure of the Lab to support what is a thriving business in one of the most important areas of the grid – the development of amazing content. “We took this problem all the way to the CEO,” says Toady, “and it was fixed for 3 days. Then it broke again. We can’t keep going to the top for routine things like ‘we cannot move in our sim’.”


Saddia Widdershins quoted Philip Linden, meeting with Second Life content creators, as saying, “As goes Grendel’s, so goes the Grid.” Of half of Grendel’s now sold because of lack of support from Linden Lab, “what does that say about the Grid?”

At a time when a number of sims have been up for sale or vanishing, it’s a question that more residents are likely to be asking.