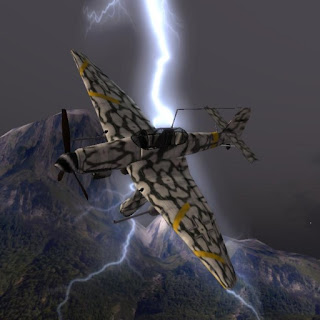 There are other Stukas out in the market, the plane being well known and a symbol of the German Blitzkrieg in World War Two. So JessicaBelle worked to make her version special: a Junkers Ju 87 G2 "Kanonenvogel."

Her plane at times when making a dive will make the "screams" Stukas were noted for when attacking, JessicaBelle saying the Germans attatched "Jerico Trumphets" to the planes to increase the effect. Plus in addition to bombs, the plane is equipped with anti-tank cannons, making it a true "can opener" against opposing armor in combat sims, such as the New Bastogne region. Should the bomb fall in the water, it makes a tremendous splash up in the air. The plane is equipped to fight in sims that use the VICE system of combat.

Vickster Kuhn, the leader of Jagdgeschwader 52, had this to say in a group announcement.


Our own Major Jessicabelle Dayafter has created a marvelous model of the Stuka. Using her knowledge of our tactics she has put together a very formidable weapon in the "Kanonenvogel!" With highly accurate bombs, this will bring your dive bombing to the next level. The Kanonenvogel is alternately equipped with a cannon that will make enemy tankers knees shake with fear! You can get this plane for a great price, only 1K Linden, at my flight shop in Huertgenwald. Happy bombing!


JessicaBelle worked long and hard to perfect the plane, and having gotten a look from the back seat, it is fun to fly. Besides combat sims, it's also good for casual flying (and certainly an attention-getter with it's unmistakable design). The plane seems to have less problems with sim crossings than most.