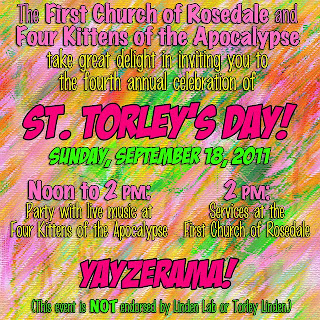 If you're a fan of Torley Linden, or looking for a fun event with a bit of humor, one might check out "St. Torley's Day" at the Rhianna sim on Sunday, September 18th.

"Torley Linden, Second Life’s 'Resident Enlightenment Manager,' has long been recognized and celebrated as a living saint. The First Church of Rosedale announced today that 'St. Torley’s Day' will take place on Sunday, September 18, with a party at noon, followed by a special service at 2 PM. The party, hosted in Penning by Four Kittens of the Apocalypse, will feature live music by popular Second Life artist Kaklick Martin.

Torley Linden has written innumerable posts on the company’s official blog and created hundreds of video tutorials. He listens and responds to residents, holding weekly office hours and keeping tabs on Second Life content all over the Web, including blogs, Flickr, Twitter, Vimeo, and YouTube. His Saint Day is the Sunday closest to his “rezday” (the day he first entered Second Life), September 15; 2011 will mark the end of his seventh year “in-world.”