At the Equus sim, the Aero Pines Park is hosting a “stairclimb tribute” to the firefighters whom were killed on the Islamofacist terrorist attack on September 11, 2001.

Aero Pines Park 9/11 Rememberance Greeter: Welcome to Aero Pines Park Fire Dept's "Stairclimb Tribute to Fallen Firefighters of Sept 11" - Go to the base of the stairs of a tower, suit up in the gear provided, then grab of hose and nozzle from the high pressure valve and begin your ascent of 110 stories. Thank you for your participation in helping us honor the brave and heroic men and women who perished on that horrific day. 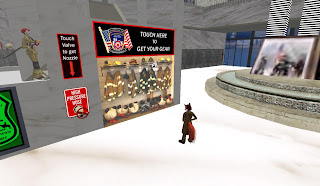 Areo Pines is normally a countryside place, but this part of the sim is temporarily taking on the look of a New York city block.Teleporting over, one will find themselves at the base of two tall, transparent towers, stretching high in the sky. At certain spots are pictures of firefighter gear one can click on to get a uniform. Clicking on a water valve next to them, one can get the nozzle to a high pressure hose. Upon getting the gear, many residents will start climbing the stairs. At the top are t-shirt dispensers, the only cost being the climb.

Cindy Bolero is in charge of the Equis sim. Chatting with her, she was, “very tired. Still working on this build,” but still willing to talk. “We started three days ago, Cindy told, “One of our builders saw real firefighters doing this in their home town of Atlanta. We researched a little and discovered first responders are doing 9/11 stairclimbs all around the country. So we built a virtual stairclimb.”

Asking how the firefighting groups of Second Life responded to her build, “Many (officers) have come by themselves, others have come with their whole departments. I'm just working away here and not able to observe to closely. Yesterday there were many real firefighters here being interviewed by media.” 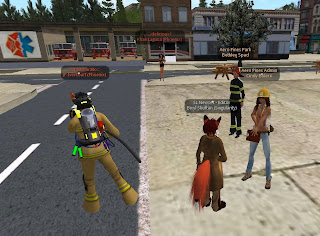 Bethlee Spad was described by Cindy as the main builder, and dropped by briefly. The interview briefly changed to voice, Cindy saying they were doing their best to keep the lag down, and the guestbooks they set up, numerous people were “liberally” entering their thoughts, “It’s a good feeling when a New Yorker comes here.” Bethlee commented, “We had one (New York) lady come here, she thought this was an incredible build." They had just set up a media of the Sept. 11 documentary, which had been streamed for the commemoration in 2009 at the now vanished NYC sim. She told me she originally planned to have each screen around the exhibit show a segment of the film, but people kept asking for it to continue. As we spoke, someone was watching the disaster unfold, “God save us all.”

Cindy explained Areo Pines knew of other 9-11 memorials, but most were simply rezzing the Twin Towers. They wanted something different, “we made it an engaging interactive build ... we made this up as we went, so its mostly how things evolve.” Another memorable build at Areo Pines was when they made a build for “the Nutcracker Ballet, where guests are given outfits, group poseball dance, and the nutcracker playing on the big screen.” For the Stairclimb tribute, “we removed a huge equestrian center. Rodeo Grounds, jumping arena, race track, etc. Our regulars like the events and exhibitions, but they also anticipate the equestrian center's return.

The Stairclibe tribute is encouraging people to donate to The National Fallen Firefighters Foundation, at http://firehero.org/donate/