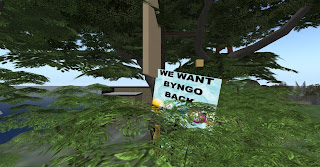 There is a new controversy in Second Life. Many happy byngo players pass time in SL by playing this game. It is my understanding that it all began with neighbors of the byngo sites complaining about the shouting of the balls was bothering them. There seems to be a way to control this issue on land. But some property owners are not bothering, which added to the issue. After many requests to Linden Lab just to see if the issue had been solved, the creator of the byngo, Dazza Staheli, has shut down the byngo servers until it is all resolved.

I spoke to Dazza this morning and he told me, “I really don't think the first return was about shout .... Ok, well the first one was on a empty sim .. was rezzed then 5 hours later was returned .. our alt who is owner on all boards got a warning for wagering ... NOT ME and its my name on all boards as creator ... now the problem is this .... that game was never played .. even the Linden didn't play it .. so how could he say it was wagering ???? ... ok then .. 3 days past .. 400 sims played 100's of games 1000's of people and nothing .. all boards have same owner .. but nothing!!!! Then in a separate 'attack' on a sim, our board was AR'd .. a 180 day old linden employee went to that sim .. looked on her records and see's that the owner was warned 3 days earlier and she just does what she thinks is right and returns the board .... I still had no contact .. but my alt got 1 day suspn ... so I was faced with a decision .. run it and take the risk of losing my alt or close it down and let the Labs do their thing ..."

There are protests going on at various locations. One was held at Governor Linden’s home, and another at Mia Linden’s office. Here is a video of a protest held Saturday:

Byngo players are hoping that the issue is settled soon and there is also a petition up on the web at http://www.ipetitions.com/petition/byngo-bonus-4-sl/
Gemma Cleanslate
Posted by Bixyl Shuftan at 6:05 AM