It's been about a week since Linden Lab announced they would not be holding a Second Life Birthday celebration this year, saying they would be leaving it up to the residents for events. Someone has come forward announcing she would be holding some.

Enter Kalli Birman, known as Brandy Maltas in real life and the manager for SL musician Mankind Tracer. On her Facebook page, she made the following announcement: 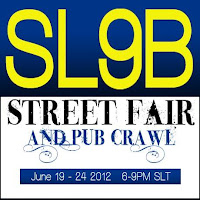 "Since Linden Lab is not hosting an SL9b (SL9th B-day Event), Seth Regan,/Mankind Tracer in SL and I have decided to coordinate our own. The Tracer/Birman Agency will be producing the SL9B Street Fair and Pub Crawl. The event will be held June 19th-24th, 6PM-9PM, at six established and respected SL Live Music venues. Participating venues are: Club Graffiti, Gwampa's Dance Kamp, Key West, Boom Pony, Ground Zero and San Diego City."

So far, Kalli is offering "6 days - 6 venues - 18 live musicians!!!" Though it's highly likely more will be joining as time goes on.

For Daniel Voyager's article on the subject: Click Here.

Hamlet Au wrote more on his take on why the Lab wasn't hosting an anniversary event this year. In what he called "a harsh but necessary virtual reality check," he noted attendance has been declining in the more recent SLB events. Citing statistics provided by Daniel Voyager, he noted that about 38,000 visitors attended the SL3B events when Second Life had "about 200,000 active users… nearly 20% of the total userbase," and in the more recent SL6B, "when there were about 742,000 active SL users, only 17,712 attended … about 2% of the userbase."

Why the decline? His guess was "As SL's userbase has grown, there are fewer SLers who have a deep affinity with SL as a unified virtual community, and more who are just interested in going to their favorite nightclub or roleplaying sim or whatever sub-community they're affiliated with."

Hamlet's post was followed by a few comments. Some more or less suggested that it may not be so much newer residents having less affinity to "a unified virtual community," than residents old and new alike having less tolerance for Linden Lab's policies.