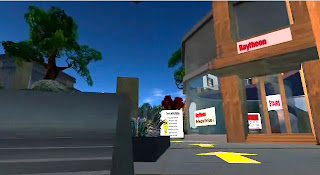 Although not as many real life businesses have an inworld presence as a few years ago, some continue to do some work in Second Life. One I hadn't heard of doing so was Raytheon, at least until I stumbled across a Youtube by accident.

The video describes Raytheon helping out NOAA bring a number of science teachers inworld "together in one dynamic learning space" at a "NOAA Virtual Workshop of Climate Change" to discuss the latest climate news to share with classrooms, suggesting there were some Raytheon workers also inworld in-avatar. 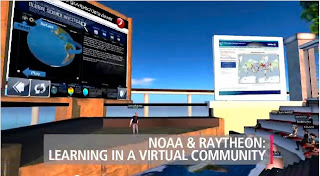 It wasn't mentioned when the event took place, but the video was uploaded on March 7, a week before the VWBPE(Virtual World Best Practices in Education) conference, so that can be ruled out.

Taking a look at NOAA Island at Meteora, there were no signs of the buildings in the video. So where this was taken remains unknown.

The youtube can be found at :
http://youtu.be/vuR2xeIcnFM . Although one can get copies of the link, the option to embed it on a webpage is gone.

*UPDATE* It's possible that the recording was done in the Energy Island sim, which while around when visited in August, has somehow since vanished, along with most of NOAA Island's other immediate neighbors. I say possible as that sim was closed to public access despite that it seemed to be set up for Education purposes.