Daniel Voyager's Blog had some disappointing news last week. Since Jan. 2010, the number of sim regions in Second Life has been a little over 30,000. In some uncovered statistics, the total dropped below that milestone. 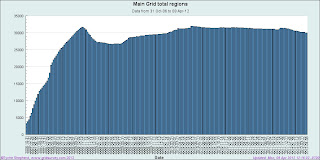 The number of sims on the Second Life Grid rose, quite rapidly according to the graph in the DVB, until the OpenSpace/ Homestead fiasco in October 2008, in which Linden Lab suddenly jacked up the rates of those sims by 66%. Numbers then plummeted due to people unable to afford the new tiers, some saying they were leaving because they felt the Lab was pulling a "bait and switch." Eventually, numbers recovered, but the rise was slow and eventually plateaued.

The present drop, the general agreement is it's mostly due to the economy, people no longer able to afford their virtual property as real life financial problems become too much. However some point to Linden Lab's decision to end the nonprofit discount as an additional reason for some educational sims closing down or moving to other Grids. It's also noteable out of these 29997 sims, under 23,000 are private estates.

As Daniel himself put it, "It’s not surprising to see this happen but if rates continue then it’s concerning for the future of Second Life." However, a look at the "Second Life Universe" forums where he found the statistics, another look showed a report that the number had risen back over the 30,000 milestone.