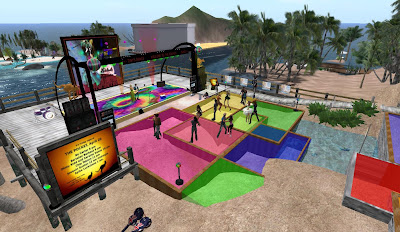 It was "Friday Night at The Pocket" Australian club on the evening of April 20-April 21. The event started at 8 SL time, with a number of live singers that night. Finally at 10PM SL time, it was musician OhMy Kidd's turn. And he got his guitar and began singing. Saraine Sands was by his side as the "percussionist," tapping on a metal bell, and getting a few "needs more cowbell" jokes from the Americans in the crowd.

Finally someone pointed out, "Hey, it's OhMy Kidd's rezzday!" And the audience cheered and wished the singer a happy rezzday. Among them were CNN iReporter Any1 Gynoid, and a certain kangaroo avatar dancing with her.

The Pocket is at the Fendahl sim at (240, 85, 31), with Cellandra Zon as manager. The club was founded by the late Delinda Dyrrsen, a noted resident in Second Life media.
Posted by Bixyl Shuftan at 12:00 PM