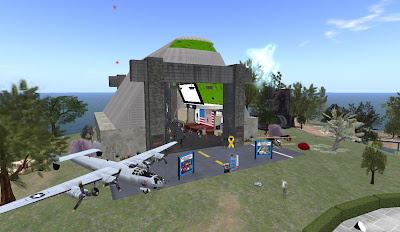 On Sunday April 29th, Patriot Island held it's monthly Wounded Warriors benefit. The event began at 6 PM, with ReggieSunset Rookswood taking the stage, and about a few dozen danced to his music on the floor below. On either side of the stage, two kiosks resembling overturned helmets accepted the donations.

As the event went on, the total amount gathered was announced to the audience. Finally at 6:54, the hundred thousand threshhold was crossed, "We have 102,925L so far!" At 7PM, it was Frets Nirvana who took the stage, and the music & dancing went on.

The event went on to 9PM SL time (Midnight EST), and a total of 214,000 Lindens were raised. Frets told that next month's singers will be, "PonDman, Guitar Zane, little old me, Mulder Watts and Voodoo Shilton."