More on the SL9B Controversy 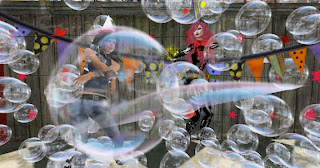 It was April 18th when word got around about Linden Lab's decision not to hold an official Second Life Birthday event, at least to the point it reached Second Life Newser and some other well-read newsletters and blogs. Numerous people commented in two threads in the official forums, SL9B and SL9B Fail, the SL Universe forums, and in various newsletters and blogs. The general feeling is of disappointment and sadness.

A few residents had the feeling, "Oh well, it was going to be a lousy show anyway." But most wished that the Lindens hadn't made this decision. There were some whom thought it was not too great a surprise, citing the Lab no longer running other Linden-sponsored events of the past. One resident wondered if the Lab would soon be abandoning the Linden Endowment of the Arts as well. One resident thought this was a great opportunity for one of the major real estate companies to gain a public relations coup by offering to host a resident-created SL9B.

It was interesting to note that a Linden spokesman posted on the SL9B Fail thetas to address the residents:


Having seen the feedback in this thread and elsewhere about the plan for SL9B celebrations, we wanted to elaborate a bit about why we’ve decided to focus on promoting numerous events hosted by the community this year, rather than hosting a centralized celebration as we have in the past.

We want to give the Second Life community more control over the celebrations and to put the focus of the events where we think it really belongs: on you – the landowners, the creators, the artists, the DJs, the musicians, the venue managers – the people who make Second Life great every day.

Many of you have invested both time and money in your own venues inworld, and we think the SL9B celebrations are a good opportunity to introduce new people to the work you’ve put into cultivating a community presence inworld (rather than potentially drawing traffic away from your region to a central event). A collection of decentralized events and exhibits means that not only can many more creators participate, but it should also help us to avoid some of the performance challenges that have lessened the fun for attendees at past SL Birthdays.

As many of you have pointed out, there are pros and cons to the approach we’re taking this year, just as there have been in the past, but we hope you’ll choose to participate and enjoy the celebrations.


Various blogs had various opinions. Botgirl Questi came up with a parody of the song "F**k You," expressing anger at Linden Labs. Daniel Voyager expressed the sadness and disappointment so many others did, hoping that there would be an effort by residents to organize some kind of anniversary event.

Hamlet Au's response was different, "To be honest, I think this state of things is just as well." He brought up an incident last year in which an artist accused Linden Lab of using a design of hers for the event without her permission or credit and numerous residents protested in her behalf without bothering to ask for her own art to compare with what was used, "another telling illustration of Linden Lab's inevitably fractious, drama-rife relationship with its own user community … bad faith on Linden Lab's part is automatically assumed." The persistent lag was another reason.

Tateru Nino's perspective of the matter was perhaps the most unique. Years ago, she had run the Second Life Third Birthday event (not called SL3B until later). She was the organizer of the event, which "had two key differences to all of the other anniversary events that have come afterwards. Firstly, it wasn’t centralised, and secondly, Linden Lab was barely involved. " Linden Lab did provide six regions, which were used for parcels for landless communities and SL groups, an art show, and the grand parade. There were numerous birthday events across the Grid as well. She felt, "It worked astonishingly well … better than any of the anniversary events before or since."

Tateru called the Linden's announcement, "almost a return to the way it was when I organized it." But this time no organizer. She thought the birthday event could be successful if both someone stepped forward to organize it and Linden Lab remained relaxed with the rules. Otherwise, the whole thing would just fall flat. She also called the decision an opportunity for such an organizer. But judging from the feedback she was getting, there was no sign of someone stepping forward. at least for now.

" What I don’t know is if the Lab is returning to this anniversary model because it is one that is proven to work, because it realises that it is crap at doing this, it is unwilling to spend the money, or it has nobody able to handle the work. Or perhaps some combination of the above."

In any event, Linden Lab has pretty much handed over the SL9B event to anyone whom will take it.