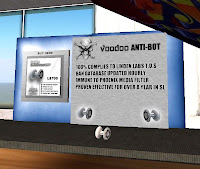 It's been over a year since the Redzone controversy, and since then people wondered if there would ever be another system that jeopardized peoples' privacy and subjected them to banning from land not necessarily for bad behavior, but because a programer didn't like them. Greenzone, the group created in response to Redzone, began raising questions about another alt-detector, Voodoo. And recently the tensions between Voodoo and Greenzone escalated into threats by the company's owner, Monkey Wonder to blacklist everyone in the group questioning his product.

Read more in Extra.
Posted by Bixyl Shuftan at 6:01 AM