Relay for Life: Mardi Gras in the Bayou

On the weekend of March 30-April 1st, the Relay for Life held its Mardi Gras Weekend. For three days, there were a number of events on a special French Quarter Sim. For Friday, the big event was the dance at the Bayou. From 5 to 7 PM was the Cure Chasers event, the cheerleading team for the Relay. At 7PM was the Team Relay for Hope with DJ Madona Milena.


We're still rockin' in da Bayou here at Mardi Gras. Team Relay For Hope is taking over the airwaves with the fabulous DJ Madonna Milena up next. Bring those dance shoes and your RELAY spirit.. and c'mon down. it's a fun time .. we gar own teee it!

Dropping in, people were dancing in the swamp near a shack on stilts. It didn't matter that some looked like they were going "splish-splash" in the marsh water, everyone was having a good time. "If any Cure Chasers need dry sneakers, instant-message me," spoke Sienna Thor, captain of the Cure Chasers, whom still had several girls there. Some of them were sporting comically huge top hats, white with pictures of the "Road Runner" cartoon character. In her latex outfit and boots, DJ Madonna looked better able to handle the waters of the swamp. Some had outfits more appropriate for a real Mardi Gras event. And of course there were plenty of beads worn around. 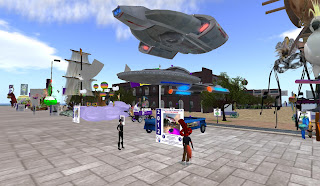 Later that weekend were other events. Saturday 10 AM had a parade with a number of floats involve, which were later parked for display. They would later be judged for a contest. The winner was the Lanterns for Life Green Lantern float. Other teams would have their events, among them Flying Tigers, Heroes for Life, Team Caledon, Starfleet, and others.

The sim was not a permanent one, but after the weekend would disappear, as if vanishing into the virtual swamp.

The weekend also marked a milestone in this year's Relay. The amount raised this season passed the 25 million Linden mark, or over 100,000 US Dollars. One team, Amaretto Ranch Breedables, has reached Emerald status, with over two million Lindens raised. The Steelhead Salmons earned their Silver trophy, with 120,000 Lindens raised. The Passionate Redheads, whom many of the writer's virtual neighbors are with, are a Bronze-ranked team, with just over 31,000 raised.

*Addition* Second Life Newser was later contacted by Kaiila Mahoney of "Goreans in RFL," saying they had raised 75,000 Lindens that weekend, 68,000 from their parade float. This would make them the top fundraising team for the Mardi Gras. They are the third ranked among the Relay teams, behind only Amaretto Horses and SL Music Races for a Cure.