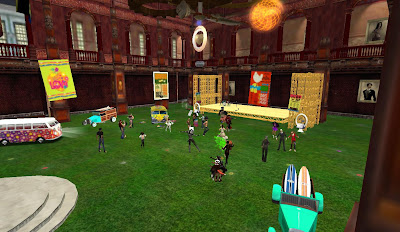 On Friday night, the Steelhead Community held a 60's themed dance, with a Woodstock look. Woodstock certainly seemed like an odd mix with this batch of elves and mad scientists from a steampunk place, but the Steelheads went with it. Their dance hall was given a stage set from the noted counterculture event, along with posters, Volkswagen fans decked out in flower patterns, "woody" trucks with surfboards for music earlier in the 60s, and a number decking themselves out in hippie outfits.

Sheriff Fuzzball Ortega DJed the event, going all-out in dressing up the part of a 60's musician. He didn't have the infamous mountain of hair on, though the 60s being noted for bad hair sported another doo. His tunes had a variety of 60s songs from the Beach Boys to the hippie songs of Woodstuck. And yes, "Long Beautiful Hair" was among those played.

There was one other thing different about Fuzzball's DJing that night. It was the first time he spoke during a session. He plans to do so again in future events.

Baron Klaus Wulfenbach was among those attending the party. Normally his hair is a bit long and somewhat unkempt, like so many other eccentric scientists. But when dancing at a party full of long haired hippies, he showed up sporting a haircut, neat and trim, dressed in a business suit.

Trader1 Whiplash of the Relay staff was also there, and RFL kiosks were set up for the party. A few thousand was raised that night, bringing the total of the Steelhead Salmons team to over 172,000 Lindens. Less than 28,000 stands between the Salmons and Gold status.

The party went on for three hours of 60's fun, with some residents who grew up in the 60's and 70s talking about the shows they saw as kids, "I tried explaining Saturday Morning cartoons to my kids ... they couldn't imagine life without computers." "We had computers then. We called them pocket calculators."

At the close of the party, residents bid each other good night, and went their separate ways.

Bixly Shuftan
Posted by Bixyl Shuftan at 6:01 AM