Direct Delivery for the Second Life Marketplace hasn't gone the way Linden Labs intended. At first, it seemed to be a simple bug of gifts to others not always reaching the recipient. But apparently, it's much more. 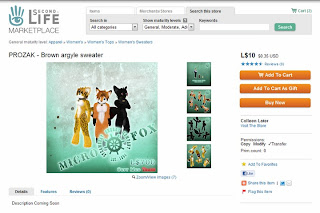 Inara Pey noted a number of other problems, including, "Listings on Marketplace do not match the actual items," incorrect merchant information (products from one seller listed as belonging to another), "products from one merchant appearing in stores belonging to other merchants, items incorrectly priced," and "incorrect ratings assigned to products (G-rated items appearing as Adult, etc)" She also stated she was beginning to observe "rising accusations of 'theft' among merchants as they come across what appears to be their own goods being listed by others." Tateru Nino called the source of the problem a "unicode bungle," listed in the JIRA as "WEB-4587." 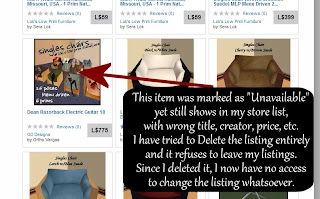 The initial response from Linden Labs was largely silence. Then a few days ago, Rodvik Linden gave a few answers on his Twitter account, pointing out an update on the commerce forum, "team has been crunching non stop to get those issues addressed. We will update as soon as we have a fix." Calling it "not an acceptable quality of roll out," Tateru Nino deadpanned, "perhaps is wasn't an acceptable quality of rollout, but it was the level of quality that we have become used to all these years."

The commerce forum update was further updated the next day, saying "two of the top three outstanding issues" were addressed
• WEB-4580: purchases are now delivered to recipients with the inventory name (which does not allow unicode characters). This will prevent future orders from getting stuck in the Being Delivered state due to this issue. In addition, all orders affected by this problem have been pushed through. • WEB-4587: updates have been made to support updating store search results, which we will process over the next week; we continue to work on the issue related to mismatched data on listings. We do know that this issue has existed since September 2010 (during the migration from Xstreet to the Second Life Marketplace).


Hamlet's article on Rodvik's response drew some positive feedback from readers, mixed in with cautionary notes, "Wow, a straightforward acknowledgment, with no BS, no spin. … Kudos to Rodvik, may this act serve as an example for all of LL. This kind of forthcoming communication can make all the difference in the world in making SL live up to its full potential." the same resident also stated, "Whether it's truly accompanied by the promised action is a different issue … everyone should hold LL's feet to the fire on this regardless until it's fixed."

On the Linden forums, residents seemed a bit more critical, "And yet he can't even manage to post this timely info on his company's official website?" "Although it is refreshing to see a CEO like Rodvik use some of the other social media to communicate with the community, the flaw with Rodvik is that he seems to ONLY use non-LL official tools to interact with his customer base. "

Second Life Newser has yet to hear whether or not things have improved on Marketplace or not. But judging by some of the comments observed, some merchants and shoppers will be relying less on it.