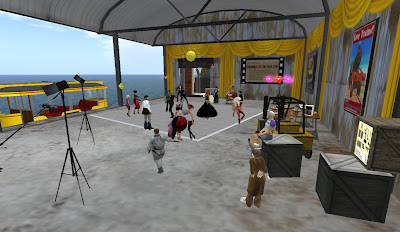 Last Saturday April 7th was a "Taste of Bay City" event held by the Virtual Railway Consortium, inviting, "all citizens of Bay City and rail & transit enthusiasts across the Grid." The theme of the dance was "Filming of the 'Murder on the Bay City Express,' (sorry machinima fans, no evidence there really was a filming)," with Callipygian Christensen as the DJ. Geo Meek was also there filming the event for SL TV. The dance lasted from about 1PM to after 3PM SL time, and there were boxes of railroad cars and track up for free for whomever wanted them.

There was a lot of funning around during the party, with people making joke accusations of who the murder was. I heard a few times that this event was to celebrate the SLRR's connection to Bay City, though they've been in town since May 2011. Someone commented that she heard Linden Lab had special plans for Bay City now that their work on the Wilderness is done, but she had no idea what they were.