Bots aren't a problem only in Second Life. In the MMO game of Runescape, they're a problem for both the staff and honest players alike. For those not familiar, a "bot" in Runescape is a player put under the control of "macros" to perform a repetitive task, such as mining and woodcutting. Illegal, if a player is caught, it results in a warning and a short ban. The second time is a more severe warning and a longer ban. The third time results in a permanent ban with the account removed.

Lately, the Jagex staff  "decided to have a little fun" with the disposing of those caught three times. So they came up with "Botany Bay," a dreary prison-looking place that can be visited in only one manner, accept an invitation from a town caller to take part in a "trial" of a three-time offender. 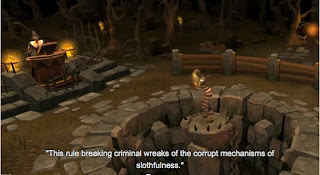 As we hunt for and identify botters, you - the good citizens of Giellnor - will be the ultimate deliverers of justice! Unrepentant and persistent bot-users will now find themselves banished to Botany Bay. This foreboding island is the staging ground for trials run by the Botfinder General, where there's only one verdict, and justice is swift and uncompromising.


Those accepting a town crier's invitation to take part in a Botany Bay event will be teleported to the courtroom. Rotten tomatoes are available to pelt the condemned, whom is cowering in a small platform in the middle of the court. The players have no say in whether or not the account on trial is guilty, that's already been decided. Instead they decide on a choice of three fates: crushed by a giant limb, fried into dust by an energy beam, or devoured alive by some unknown something from below. Repeat jurors are awarded the "Pitchfork of Vigilantism" and later the "Pitchfork of Justice." 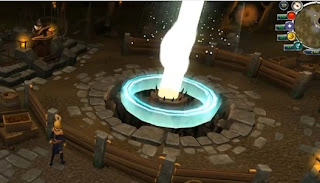 The accounts in question have been banned anyway, so the purpose of these trials is for show. There's just something about seeing a cheater get his/her coming.  There's also the possibility that Jagex also had in mind these trials were to cut down on criticism. By giving these show trials, that would give the impression something is being done about theft.

Such a system could easily be replicated in other MMOs after adaptations, and perhaps Second Life. It's easy to imagine a "Botany Bay" for copybotters. But suppose if such a system was being set up on the Grid? Why not allow the jury to determine an avatar's guilt or innocence?

I  imagine though that those accused of griefing would prefer to take their chances with the Lindens instead of a jury. Suppose someone accused of dropping particle bombs on Luskwood found themselves facing a jury of furred avatars?

Oh well, one can dream.