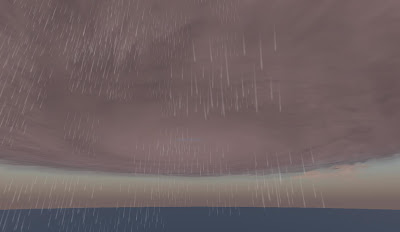 Just as when the East Coast in the United States is looking forward to Halloween comes a scare from Mother Nature. Usually hurricanes don't come this way after Labor Day, so it was a surprise when Hurricane Sandy began heading this way. To make matters worse, it's expected to merge with a cold front system. This collision of a tropical storm and the cold front has been described as a "perfect storm." Coming so close to Halloween, it was dubbed "The Frankenstorm" by some.

High winds and flooding are expected, and exactly where the worst will be is not clear due to the unpredictable nature of hurricanes. Power could potentially be out for days in places. A few SL Newser writers, including the Editor, are in it's path. So there is the potential of updates being down for a few days.

Check out weather.com, or other sources of information on the latest.

For a look at weather in Second Life, check out NOAA Virtual Weather (2011 article).