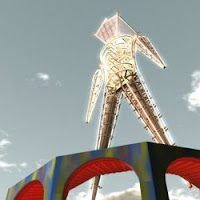 BURN2 is an extension of the Burning Man festival and community into the world of Second Life. It is an officially sanctioned Burning Man regional event, and the only virtual world event out of more than 100 real world Regional groups, and the only Regional to burn the Man!

The BURN2 Team spreads Burning Culture and Burning Man Ten Principles year round in Second Life, culminating in an annual major festival of community, art and fire in the fall - a virtual echo of Burning Man itself.