Some good news for fans of the Burn2 festival, especially those whom might have been unable to come by last week. The event's been extended another week. 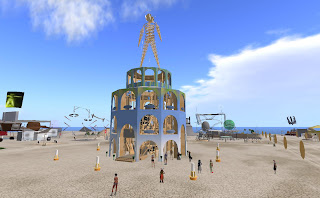 Have you had as much fun as I have? What an amazing BURN! We are having so much fun that we have decided not to close! We will keep the Playa open another week. We are going to NOT have formal crazy performance schedules, but camps can host events on their own plot, Center camp, or the stages. We will keep audio streams going and setup an open microphone system. Let’s do some fun things, be relaxed and have fun! You may even see Zombies on the Playa Wednesday the 31st! 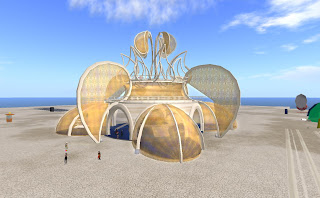 We will push our BURNS out until next Saturday and Sunday, so this all fits in with that! I know you were all ready to see The Man and Temple Burn, but you can wait, cantcha? Times will remain the same-  4 AM, Noon and 8 PM Saturday, November 3rd for the Man and Sunday November 4th for the Temple.

Thank you all again for making this the most fun most memorable BURN  ever!

Yours truly dropped in at the Burn last week just in time to see a tour being done by EmCee Widget. "Welcome to Center Camp," he greeted me, "We are broadcasting to Burning Man Headquarters in San Francisico right now. Everyone is getting at tour at Headquarters." Besides EmCee, Burning Man has two other represenatives, M2Danger Ranger and Dusty Udal (formerly Dusty Linden). The tour went to The Man, the Temple, where a few people stopped to meditate, and at least two clubs having events.

Gemma Cleanslate has been too busy with Ranger duties to write much, though others have been keeping an eye on the event. Daniel Voyager has continued to write about the festival, in addition to posting a number of pictures on his Flickr.

Be sure to keep an eye on the Burn2 Schedule for events.