Review of World of Warcraft's "Mists of Pandaria," Part Two 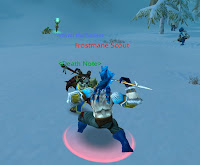 Last week, we had the first half of our review of the latest expansion of World of Warcraft, "Mists of Pandaria," in which we described the new player race and continent. Today, we look at other features in the game, such as the new Pet Battle System. We also look at the response the expansion is getting and how well it's been doing for Blizzard in it's first few days.

Read the second part of the review in Extra.
Posted by Bixyl Shuftan at 6:05 AM