He'd get them this time. 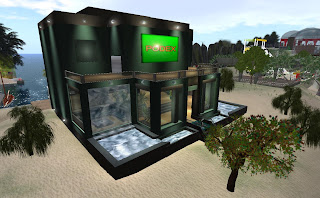 It was September 19, or "Talk Like a Pirate Day," and he was ready to once again make his move on the Podex Bank. Most likely they were expecting him, probably to repeat his pirate imitation that somehow ended up falling to pieces of eight. Well, no pirate act this time.

He'd gotten his hands on a flashy "gun." It didn't fire bullets, but instead would let loose a series of bright, blinding lights. He'd dazzle the bank tellers, and while they were half blind with spots before their eyes, he'd go in, get the Lindens, and quickly be back out. Simple as that.

He soon got to the bank. No need for a disguise. In his usual dark leather jacket, he began walking up the steps …

"Avast me hearties! This be a stick-up!" 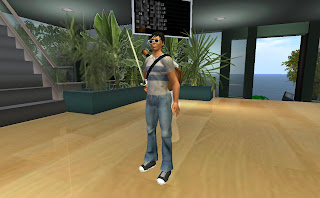 He peeked inside. He saw someone confronting the tellers. With a guitar on his back, he looked like a musician, except for one thing. He was holding a sword, and he was pointing it at the tellers.

"Heh, isn't it obvious? Who else could it be but Clumsy Cooper again? Only he could be this brazen and dense."

"Guess he got better at disguises. Heh heh, nice one Clumsy."

"Arrrr! Who be this Clumsy Cooper? Jes gimme ye gold, and aye not be stickn' ye with me rib poker an' takin' ye guts fer garters."

The tellers just laughed, "Now you just turn around and go, and we won't call the carps on you."

He couldn't believe it! Some other robber was after Podex. HIS Podex! Well, he wouldn't stand for that.

He then walked in, "Now wait just a darn minute!" He confronted the sword-wielding guitarist, "This bank's mine!"

The musician with a most unmusical instrument looked his way, "Who the bloody hell be ye?"

"I'm the guy who has dibs on this bank. I've been trying to get what's mine for over a year now. I'm not going to let you beat me to it."

"Then ye be a lousy cutpurse. Stand back an' leave th' plundering' to me."

"Well what do you know?" One teller commented, "We have two numbskulls who think they can rob us today."

"Shut up!" both robbers yelled in unison, then Cooper raised his weapon, "All right, this ends now!" He pulled the trigger, and …

He pulled the trigger again, still nothing.

One of the tellers chuckled, "Your freebie didn't work as advertised, Clumsy?"

"This thing must be stuck or something." Frustrated, he looked closer at the gun.

The gun had gone off, but the light went in all directions, not just forward, and he'd gotten it in the eyes at point blank range, "Ahhhh!"

Half blinded, Cooper could barely make out the other robber going to him, then he felt a punch to the jaw. He staggered back, then felt a body blow to his stomach. He bent over, walking backward, "Urrrrgh, I'll, get, you." 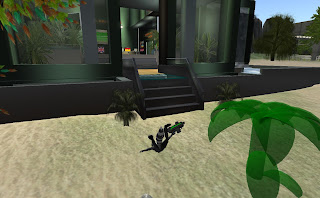 "Ye be gettin' nowt but a knuckle sandwich ye dumb landlubber." Cooper saw the other robber back up a foot, then suddenly spring forward. He felt a tremendous blow to the chin, and fell backward. He fell over the bank steps, and onto the beach.

Cooper blacked out momentarily. When he came to, he looked around, and saw a SLPD car next to him. Surprised, he stood up. But then saw it was empty.

"All right!" he heard from inside, "You're under arrest for attempted griefing."

"I don't understand," he heard the other robber say, speaking more normally, "How could things have gone so wrong?"

"Well, number one," he heard a teller speak, "you were so busy with Clumsy Cooper, you didn't see us alert the authorities. Number two, your sword broke when you hit the counter because it was a cheap one not much better than a freebie. And number three, criminals are stupid."

"That will be quite enough," he heard someone else speak, presumably another policeman, "Yes, we saw Clumsy too. Knocked out like a light. We thought he knocked himself out again, then we heard the commotion in here."

"Yeah, we finally found someone as dumb as Clumsy."

"Where you're going, you'll have lots of quiet time. You have the right to remain silent. … "

It was then Cooper decided to sneak away, knowing where the police would be headed next. He slipped away into some vegetation. As he moved further away, he grumbled to himself about another plan gone awry. But at least the guy responsible would be the one getting locked up instead of him.

Back at the bank, the cops did a quick search for Clumsy Cooper, but not finding him radioed the station, and drove off with the suspect in custody. Inside Podex, things quickly went back to normal, reminding themselves even if the robbers had cooperated, they wouldn't have walked away with a single Linden. All business was done through electronic transfer. There was never any threat to the banks' funds.