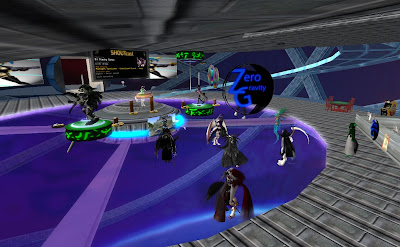 It was a "Spook-tacular" night at Club Zero Gravity, which held a "Monster Mash" party last night. About two dozen people showed up, invited to wear spooky looks or something else they would not normally wear. Among those attending was owner Nydia Tungsten, who came in an outfit resembling her WoW Death Knight. The 500 Linden prize was doubled to 1000 L after a a winner of the 'sploder won her money back twice after putting it back in. DJ Slashy Sands had a two hour playlist of spooky tunes from "Thriller," to "This is Halloween," to "Monster in my Pants," and more. She ended up getting hundreds of Lindens in tips.

The contest was a five person tie, a first for Club Zero Gravity.

Events at Club Zero Gravity are normally Tuesdays and Thursdays from 6 to 8 PM.