Preparing for "One Billion Rising"

Preparations are well under way for the 1 Billion Rising in Second Life as part of the real life Rising. The four sims are arriving. The djs and performers are ready. Customer Relations Officers are training. Greeters are getting ready to meet you at the gates. Both groups will be able to help you move across the sims to reach your destinations. Saffia Widdershins is creating the official machimima based on the real life one that you can view on you tube : 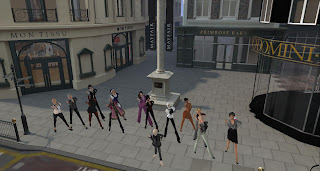 "'Break the Chain' aims to raise awareness around the world about V-Day's fastest escalating global campaign to date, ONE BILLION RISING. The ONE BILLION RISING campaign began as a call to action based on the staggering statistic that 1 in 3 women on the planet will be beaten or raped during her lifetime. With the world population at 7 billion, this adds up to more than ONE BILLION WOMEN AND GIRLS. On 14 February 2013, V-Day's 15th anniversary, activists, writers, thinkers, celebrities and women and men across the world will come together to express their outrage, strike, dance, and RISE in defiance of the injustices women suffer, demanding an end at last to violence against women.”

That is a quote from the youtube page.
You might like to read some quotes from the page Why I am Rising at the SL blog and perhaps add your own: http://onebillionrisingsl.wordpress.com/why-im-rising/
Yes! Men are involved in this and are invited! 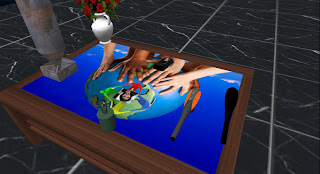 You can also view the words of the song on the youtube site and will directed where to download it if you like. I am privileged to be a participant in the dances that will be in the sl machinima that Saffia  is filming and I can’t wait to see it . If you want to learn more about the One Billion Rising in SL and in real-life you can  hear Honour Mcmillan at the Sojourner Auditorium at Noon, 12:00 slt on Friday the 8th of February.  http://maps.secondlife.com/secondlife/Virtual%20Ability/67/175/23

I feel as if I am giving you lots of reading homework! It is worth it. Find out more at www.onebillionrising.org.
Gemma Cleanslate
Posted by Bixyl Shuftan at 6:01 AM