Update on "Creations For Parkinsons" 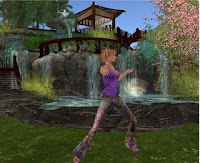 In October, Second Life Newser did an article on the "Creations of Parkinsons" sim, ran by Barbie Alchemi. She was inspired to create the place due to her mother, known in Second Life as Fran Seranade, whom had the illness. Recently, Hamlet Au interviewed Fran, which can be seen Here, in which she talked about how her journey in Second Life has helped her recover much of her physical ability.


Speaking to Barbie, she was happy for the attention this new article brought, and informed the Newser there would soon be some new developments at "Creations." In the meantime, they were still running events there, in addition to the Sunday night "Demo Derby" in Random.