Usually, there's only one benefit a month in Second Life for the Wounded Warrior Project. This weekend, there were two, in Friendly Airport and Veterans Isle.

On Friday evening Feb 22, there was a Wounded Warrior benefit at the Friendly Airport in the Firespire sim. The event was publicized by Vickster Khun of New Bastogne, and singer Frets Nirvana, whom performed for the event. The event went from 6 SL time to about 9 SL time. 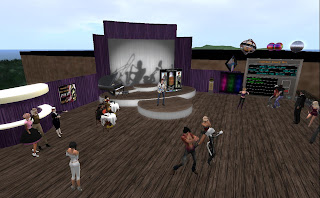 Tonight, Friendly Airport is hosting 4... count 'em 4 LIVE performances back to back. HELVIS will rock your socks off with 50's and Elvis tunes 5-6pmm Jimmyt49 Dukes, Anek Fuchs and Frets Nirvana will perform benefit concerts for the Wounded Warriors Project, starting at 6pm SLT. So bring a friend or two and party with the NAS at their home base at Friendly Airport!


Vickster Khun was among those in the audience., which numbered about thirty avatars. When Frets Nirvana took the stage at 8 SL time, about 15,000 Lindens had been raised. By the time the event ended, the total had risen to 23,700.

On Sunday came the main Wounded Warrior benefit. As usual, it was on the last Sunday of the month. But this time it was in a new sim, Veterans Isle. Dahlea Milena and others from Patriot Island were there, and the hours were the same, 5PM SL time to a little after 9PM. Frets Nirvana and GJackie Winklerannounced the event in a few groups after Kitzie Lane started things up. 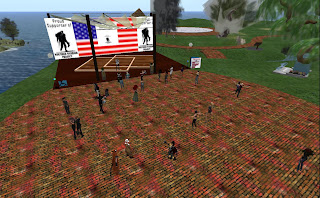 Hi folks! We have this month's Wounded Warriors going on tonight right now. Kitzie Lane is filling in for Waya. Up next is Pondman Haalan. Come on out and support, and enjoy some great music!

Wounded Warriors program has developed significantly over the last several years to include advocacy, benefits counseling, caregivers retreats, coping/family services, peer mentoring, warriors to work and many others.  Veterans Isle (70,216,23) 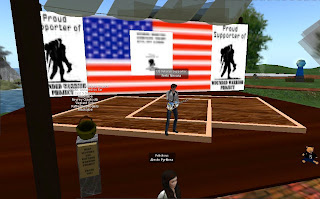 There had been a woman whom offered to striptease to encourage the men to donate, but Daliah told everyone that couldn't be permitted, "we are required to maintain certain standards here for the good of our vets all the time, due to RL legalities for non-profits."


Dahlea had nothing but praise for Frets, "He's amazing, and all the work he does to coordinate & schedule these wounded warrior benefits, he's tireless in his passion for this cause."

And so with two events this weekend, the Wounded Warrior Project has raised about 250,000 Lindens. Stay tuned for the next fundraiser on March 31st.