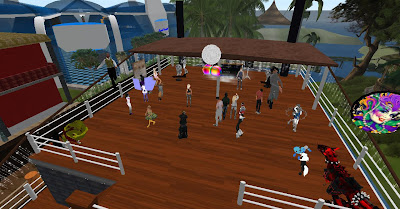 YuliaV Resident, also known as DJ Yulia, sent this picture of the grand-reopening of Club Mardi Gras. Originally in FP Proteus, it had to be taken down when the sim was closed a few weeks ago. It's owner Nydia Tungsten found a new home for the club. And on Monday February 18th at 8PM SL time, the club and the people there were ready to party with a 5000L prize.

A sim-straining 35 residents were at the club at times. A regular schedule will soon be determined.
Posted by Bixyl Shuftan at 6:31 AM