In the video Linden released in time for dio, it was branded as a "creative and social experience that allows anyone to make and explore places based on anything." The press release stated users could "create places by adding text, photos, videos, and interactive objects into interconnected 'rooms' that give spatial context to the content you share. You can keep your places private, share them with friends and family, or allow everyone to explore and enjoy them." It also states there was an online chat feature with other users, and in the future one would be able to make money off the places they created.

Rod Humble was quoted as saying, "dio is a new shared creative space on the web. Based around the concept of linked spaces, dio makes it easy and fun to create  or visit experiences of all kinds." He described dio as still being in development, in beta, "but so far our testers have created a vast range of spaces." He also brought up the future ability to make money by mentioning what Second Life's content creators have done, "One of the things that's made Second Life successful is that users were able to monetize their own creativity by selling their creations. Second Life's economy was extremely robots with over $500 million worth of user to user transactions last year." He hoped that by sharing ad revenue with dio space crators and allowing them to sell their spaces, "this will encourage the kid of incredible dedication and creativity we've seen in Second Life." 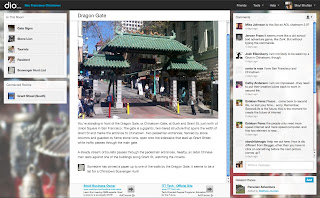 Forbes writer Carol Pinchefsky wrote about someone from the Linden Lab staff showing some of what dio had to offer, saying it could be used for personal pages, games , and more. He suggested the same features that could be used for a game could be used to make an advertisement for a hotel's page. Of the plans to allow dio users to make money, Pinchefsky called it a welcome contrast to the Instagram service changing it's fine print to sell the pictures uploaded by it's users without permission or giving them a dime, "Linden Lab will be giving rather than taking. It's a great concept, one that I can't wait to see implemented."

Hamlet Au expressed similar optimism about dio. He also noted that in the terms of agreement, transactions would be done in Linden dollars, and mentioned the LindeX exchange. He felt this was a sign there would be some future interaction between Second Life and dio "at least through commerce." Hamlet reported on a dio space created by SL blogger Inara Pey, "it seems to be the most detailed and interactive by far, though there seems to be no sign of it now.

Not everyone has been impressed with dio. Iris Ophelia commented that the hype made it look like "possibly the latest and greatest thing." But sitting down to take a look at it, her impression changed. She described the video as misinforming, feeling it suggested moving a character around. She, and a number of other readers, felt "dio is more like a MUCK/MUD/MUSH with pictures than anything else." The idea of using dio to make a store for Second Life merchants she thought "would be one of the least effective uses of the platform," contrasting the "dynamic social experience" of the Bare Rose store to the "comparatively static spaces of dio." She felt dio was easy to use and had much potential, "but it's not the only option, nor is it the best tool for the job."

If you want to check out dio for  yourself (and yes, it really is spelled with a lower case 'd'), go to https://www.dio.com. One of the spaces there is a new rendidtion of a classic computer game from the late 70s, "Adventure the Colossal Cave." There's also a list of tutorial videos Here.