The Flickr photosharing service is very popular among Second Life residents. Many use it to record pictures of Second Life events, such as Daniel Voyager's screenshots of the "One Billion Rising" event last week. But how often do people think about it's rules. That one doesn't use it to post images showing graphic sexuality and violence is obvious, or copy others without giving credit. But as it turns out, there are others not that many are aware of. 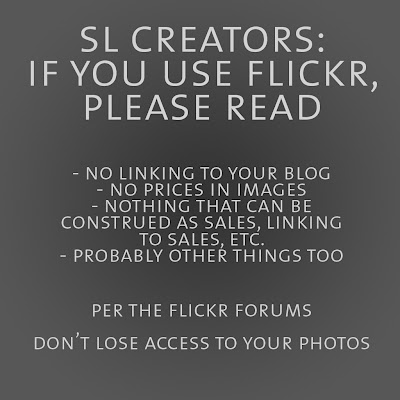 Iris Ophellia found out about Cory Edo, a builder and the owner of a furniture store whom ran afoul of Flickr's management. They restricted her account and a number of images were blocked. Unable to "get a straight answer from support after two requests," she checked the Flickr forums, and found "it's not enough to not link a sales site - you can't have pricing, you can't link to your blog."

As Iris pointed out, rules "that almost every other designer, blogger, and photographer in SL" are breaking because they "aren't exactly shared openly by Flickr to begin with." 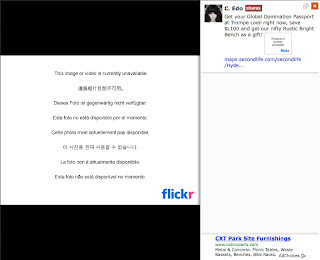 Cory wrote details on her Plurk account, "and if you get a notice from support about your account, don't bother asking them for details b/c they just give you a c/p response that doesn't clarify any of the above additional stipulations ... keep in mind this is what the forums people on Flickr are telling me, its not in the TOS, I was told to respect the 'ethos' and I guess figure all this out myself. ... I was told that linking to my wordpress blog (that I do not sell anything from directly) was still advertising. Bloggers usually link to the stores that they're featuring, sooo ... "

Cory got some feedback from other Flickr users, Damien Fate commenting, "Well I only use flickr FOR advertising, and I pay for a pro account. If that's not allowed then their loss, I'll remove my pro subscription." Luna Jubilee wrote, "This comes up and around through the sl community every year or so ... flickr reserves the right to remove that photo or set ... up to your entire account. with or without warning." Daphne Klossovsky wrote, "Yeah, we had this problem before too. Someone flagged something and the mods also flagged us for commercial. So I just deleted all text (we don't have prices on our posters). They seemed satisfied with that, But I don't see why you can't link to your blog."

Cory made the decision to go from a pay to free account, "I've just been contacted by another Flickr user (not support) who offered to tell me the secrets of what violates Flickr's TOS and I don't even care. I'm dropping the Pro account and deleting most of the pix ... if I'm paying a company I expect to talk to their support and not a bunch of self-righteous hall monitors in their forums. ... I've gotten the impression they barely tolerate SL users in general, again that whole 'we're a real photography site' attitude. ... "


So what to do? Ophelia wondered if Second Life residents should start looking for alternatives, mentioning "Tumblr" and "Pintrest." One of the people responding to Cory wrote, "I used photobucket before SL...but then switched since flickr was where everyone was hosting." As Ophelia put it, "But unless there is a major shift in where the SL community at large wants to be, most of us will probably cling to Flickr for as long as possible, even if the service is ill suited for our needs."