"Day of the Dead" Party in Exmoor 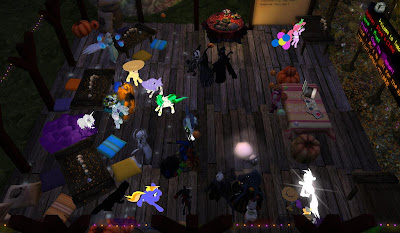 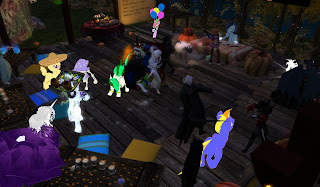 One would expect a "Day of the Dead" party and ponies to be an odd mix. But that's what happened on Sunday November 1 at the Nissan pony community. At a dance stage in the Exmoor sim, a number of locals, friends of, and a few visitors, dropped in for a party to celebrate the "Dia De Los Muertos" event.

The ghosts of the past gather with the living, the stream is running. It's time to party and celebrate our ancestral dead and the fact we've all made it through another year with the winter ahead (or summer). There are some tricks and treats too. Come dance and take part in costume competition in theme with our holiday. Some $L prizes are at stake. Shake dem bones! 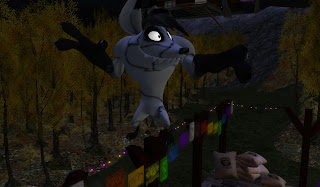 DJ Crim, whom also plays time to time at Club Cutlass near the SL Newser office, was the one playing the tunes for the event, such as "Thriller," and "The Reanimator." On occasion, a pumpkin with a letter would drop from above, and people were invited to click on those orange gourds with the first letter of their names, which had random gifts inside, such as pony avatar necklaces and costume headpieces. One pony balanced a tray on her head, inviting people to take a piece of candy. There was also a table of goodies from candy to sushi, to "bread of the dead."

$1000 Lindens was awarded to the lucky winner of the costume contest. Later in the day, there would be a reading of ghost tales in the Trosdale Library a few sims away. Other locations in Second Life would also hold "Day of the Dead" events, such as the Smithsonian Latino Virtual Museum.