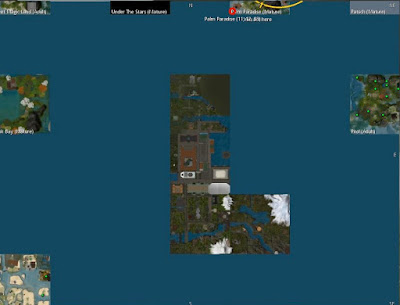 The long-delayed end of the Steelhead sims may finally be happening. Set to close after the month of September, the sims would remain up for weeks afterwards, with the last known event happening there in late October. Finally yesterday, November 24, on Facebook, Fuzzball Ortega posted, "Looks like the Steelhead sims are finally closed for good. The sims are showing on the map, but don't have names of each sim listed. And I'm unable to teleport over."

The exact date of when the sims were no longer open is up for debate, the land reportedly been accessible as late as November 17. RockAndRoll Michigan commented on Steelhead chat in Second Life they had actually closed the day before, on November 23. But for most the date was unimportant, those on at the time reminiscing of what was now fading away, "lots of great memories,  first time I walked around  city hall ,  the wonderful bridges and hills .... the people of course and always first .....  Lunar makes such great settings."

Fortunately one of the Steelhead sims had been saved by Willow Leafstorm, now under the name Ravenwood Forest. Parties had continued to be held there every Friday. Now it seems the place will truly be all that is left of the noted Steampunk-themed estate as the rest finally fades into the virtual nether.
Posted by Bixyl Shuftan at 6:01 AM