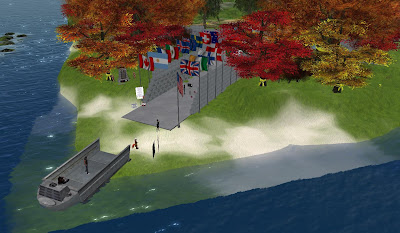 It's Veterans Day, and what's become a yearly tradition has returned to the Grid, the Second Life Veterans Tribute. Made up of a memorial wall to honor American and other veterans of wars current and over history, the Tribute has appeared in some form every year for several years, built and set up by the Second Life Veteran's Tribute Group. 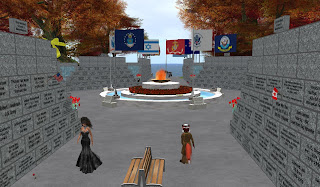 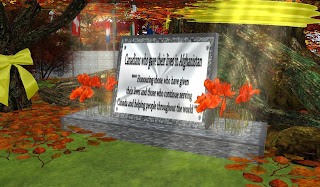 The main feature of the Veteran's Tribute is the memorial wall. Each brick represents a veteran or group of veterans. Visitors can request a new brick be built in honor of someone by putting the name and some information on a notecard, and putting it in one of the mailboxes there. There are hundreds of named bricks, and some room for more. The wall is set up around a central fountain with the US Armed Forces flags flying overhead. The main entrance is at a landing craft, leading to one section of wall decorated with a number of nations' flags. One can also place flowers, flags, or yellow ribbons at the wall.

Besides the memorial wall, there are smaller memorials around, such as the Canadian Veterans in Afghanistan memorial, the Fort Hood plaque, and the POW empty chair tribute.

The Tribute has been the scene of events in the past. This year, there will be several musicians, live and DJs, performing there. 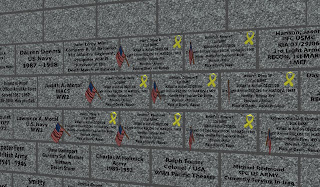 The Newser has covered the Tribute each year since 2010.  There have been a number of stories about it from Lohti Aeon/Jacob Burton, to one Marine whom made sure his fallen comrades would be honored, and more.