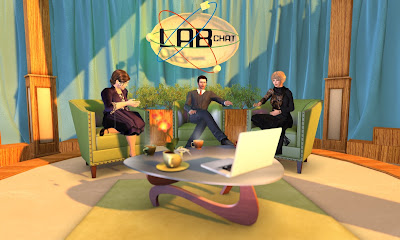 Yesterday, Thursday November 19, was the first session of "Lab Chat," the new Q an A show organized by Linden Lab. The show started at 10:30 AM, taking place at the LEA Theater, and went "well over an hour." Jo Yardley and Saffia Widdershins hosted the show with Ebbe Linden.

Due to real life, none of the Newser reporters could attend the show. But Ciaran Laval was there, and wrote some about the event on her blog. She described it as going "quite smoothly, which was quite impressive with a four region setup that attracted over 150 people. The show launched on time, without any technical issues ... The questions had been selected from a pool of 46 questions submitted via the official Second Life forum."

Ebbe was described as talking "about land, commerce, Marketplace, experiences," and other topics. Of the Grid's land, of which there was a drop in sim set-up fees earlier this week, Ebbe stated that the Lab was continuing to look at options, but there were limits that could be done. Ciaran wrote that "reading between the lines," Ebbe was essentially saying there would be no drop in sim prices.

Ciaran reported there were a number of other Lindens there, "some lurking backstage where they were also joined by some of the Lab Chat production team, bloggers and of course residents who found backstage a less taxing location for their graphics stage than the main theater." She stated the team was "taking unscheduled questions and even asking their own questions."