Yesterday in the official Second Life blog, Linden Lab announced two changes in their sim fees that will be welcome news to the Grid's residents. "Effective immediately," the fees for setting up a private sim have been reduced up to forty percent. 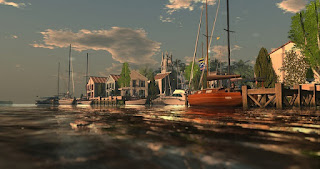 The changes in the pricing plan do not affect monthly tiers ($295 a month for full private sims). But they can be combined with the fifty percent discount for nonprofit sims. So the price to set up a private sim for a nonprofit would drop from $500 US dollars to $300.

The other change regarding Linden fees is about the status of sims with grandfathered lower tier pricing ($195 US dollars a month for full private sims). Previously, when the ownership of such sims changed hands, they would lose their grandfathered status. Now, they keep their status when they have a new owner.

Inara Pey called the changes, "a step in the right direction," comparing it favorably to the one month "land sale" in October 2011 which failed to change the overall slow decline in the total number of privately held sims that year. Jo Yardley was glad to hear the news as well, though thought the set-up fees were still too high. Hamlet Au felt the changes were aimed not at the typical sim owner, but at land barons, calling it a move to encourage them to expand, and thus help maintain Linden Lab's revenue for enough time for the Sansar grid to gain a large following.

For the announcement in the Linden blog: Click Here.
Posted by Bixyl Shuftan at 6:01 AM