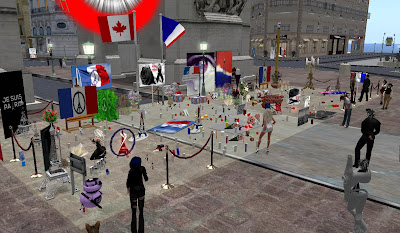 Stopping by the Paris 1900 sims yesterday on Sunday, November 15, people were still gathering there to pay their respects to those killed on the attacks on the real life Paris on Friday the 13th. At one place, residents were leaving candles and other items from flowers to flags as part of a shrine for the dead. 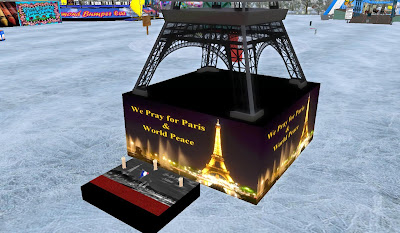 But the tributes were not only at the Paris sims. At Creations Park, a small memorial, "We Pray for Paris and World Peace," was set up. 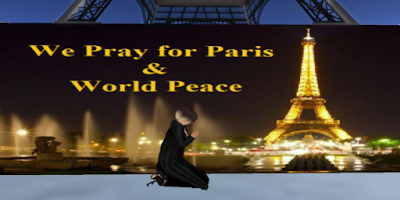 Barbie Alchemi, the owner of Creations Park, sent the Newser the above picture, "I built it as soon as I heard what happened. and as soon as I put it in place this women spontaneously knelt down to pray.  She told me her family lives in Paris. It really touched me. I love the way the whole world comes together in Second Life."

Several blogs and newsletters have commented on the reactions to the Paris attacks, including the SL Enquirer, Daniel Voyager, and  New World Notes.

As Second Life, and the world, mourns for the civilians who were killed, the retaliation has begun. Ten French military jets bombed the city the ISIS/DAESH group consider their capital. No doubt there will be more to report on about the attacks in their aftermath.