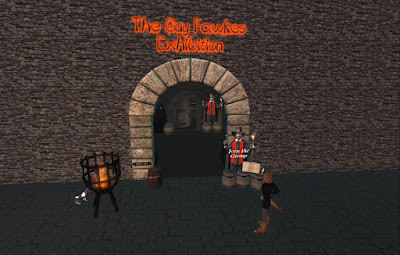 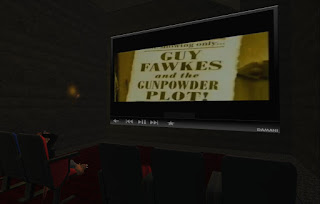 "Remember Remember the Fifth of November." Today is "Guy Fawkes Day" in Britain, also known as "Bonfire Night," the evening marked with bonfires and the setting off of fireworks. For those who want to know more about the events about the holiday, there's a Guy Fawkes Exhibition in the Lost Inhibitions sim.

Just inside the entrance are a few freebies, including a Guy Fawkes avatar, of which one can simply just wear the clothes, and a gunpowder keg. Inside are walkways to two rooms, the theater and the exhibit. The theater, of which one needs to be able to play the media, shows a BBC program about the Gunpowder Plot of which Guy Fawkes was arrested and tortured for, done with an occasional touch of humor. Getting there, watch out for anything dropping from above. 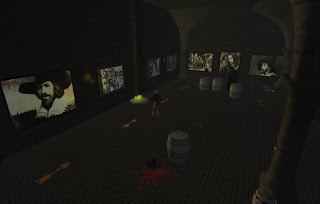 For the exhibit, click on the pictures on the wall one by one to get a step by step descriptions of events. There are also a few props one can pose with.

The exhibit is at Lost Inhibitions (88/53/22). There's a Guy Fawkes Day group one can join. It mentioned a party sometime today, but didn't give the time.

Keep an eye out for other Guy Fawkes events. Many are no doubt in sims frequented by Britons, but people from other parts of the world have gotten in on the act. This includes the Happy Vixen Club, which has a Guy Fawkes Night party at 8PM SL time tonight.