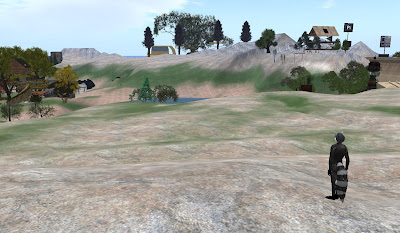 A little more than two months since the third party Linden currency exchanger closed down, a visit to their location in the Coda sim revealed ... an empty space. It seems Jacek has more or less given up on Linden Lab reversing it's decision to order all independent currency exchangers in Second Life to cease operations and close down in Second Life.

Podex, owned by Jacek Shuftan, and the Second Life Newser had a long history together. The third party Linden currency exchanger, which traded Linden dollars for several real world currencies, received praise from people, such as business owners and overseas residents, whom would have to wait for Linden Lab's Lindex to approve transactions. They began sponsoring the paper a few months after it's founding. But banks doing their job well is uneventful, so the Newser did a number of advertisements for them over the years, notably the continuing misadventures of a bandit who kept trying to rob the place and never succeeded whom would eventually be known as "Clumsy Cooper."

But in May 2013, trouble struck when Linden Lab first ordered all third party Linden exchangers to close. Podex resisted at first, saying they had obligations to their customers. Linden Lab responded by suspending Jacek Shuftan's account, effectively shutting down Podex. But residents complained and Linden Lab made a partial reversal, allowing a list of approved third party exchangers, including Podex, but they could only sell Linden dollars, not buy them from residents. This Linden third-party exchanger program would continue for two years until June 2015 when they announced the program was coming to an end and the exchangers had until the end of July to do business. Jacek hoped Linden Lab would listen to reason, and over a thousand residents signed a petition to keep the exchanges open. Despite complaints from some overseas residents the Lindex still wasn't working for them, Linden Lab went through with it's decision to close.

In the past few years, Podex diversified it's service, trading the virtual currency of InWorldz and a number of other virtual worlds. But now Second Life residents will have to do without their service. And for the Newser, this is the end of a long business partnership, of which their loss has been a painful hit in the pocketbook.