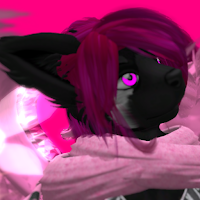 Among those in the Sunweaver Estates, where the Second Life Newser's office makes it's home, is Marusame Arai. Between there and a few hangouts such as Luskwood, Marusame, or simply Maru to her friends, she's gotten a little attention through her cutsie mannerisms and her pinkish appearance, selling a few wares on Marketplace and appearing in an occasional cartoon.

More recently, Maru's made news by being interviewed by Kotaku, a video game newsblog. Besides her Second Life activities, she's a self-described "angry video game nerd" whom has a number of games on Steam. Among the things that makes her angry is the censorship of some video games, such as certain Japanese ones before being put on the US market. So she created a group on Steam: the "Cut-Content Police," which currently has over 970 members.

"I felt that knowing whether a game has been altered for censorship or is lacking features and or content should be transparent and it often isn’t." Maru told Kotaku, "Cut-Content to me is defined as content that was snipped out to appease something or someone AND is still being actively sold in its original form, that’s KEY." One can read the article, "The Steam Players Who Fight Against 'Censorship' " in full in Kotaku.

Most of her time Maru's appeared as a black Lusk "Wah," or red panda, dressed in pink with pink wings,  though more recently has gone about in a pinkish Kemono avatar. She's occasionally been called "The Pink Wonder." She also has her own "pink and fluffy" webpage at www.marusame.info.