An expended version of SL10B display finds a new home. 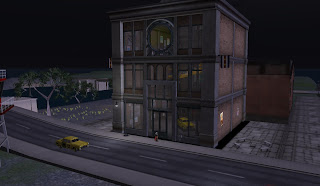 BAY CITY, SL (28th January, 2016) -  For Bay Citizens, one of the highlights of Second Life's® 10th Birthday Community Celebration in 2013 was a display highlighting the history of Bay City and the Bay City Alliance. It was long-hoped to bring the display back to Bay City after the event.

Thanks to landowner Sylvia Tamalyn and History Pavilion producer Marianne McCann, as well as additional donations by Uccello and Angela Poultry-Seale and Laetizia "Tish" Coronet, this display now graces Bay City, hosted just west of the Bay City Fairgrounds. It can be found at Bay City - Molesworth (235, 115, 25) 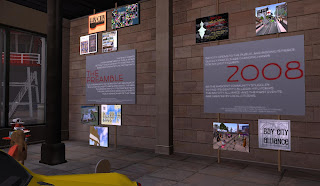 The build, which will officially open in conjunction with Mole Day festivities this Saturday, is already welcoming visitors from Bay City and beyond. It boasts a chronological history of the city as well as a Bay City poster display, a wall featuring past and present Ms Bay City winners, and a photo display of prominent places around the city.