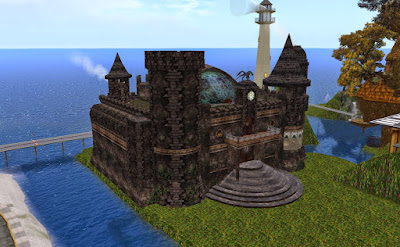 Some sad news for the residents of the Sunweaver/Angel Estates. Last week, the Primal Passions Club was closed. There was no announcement in the club's group, although the owner, Rayven Tentigo (Rayven Avalira), had earlier informed the Newser she would close the venue if numbers did not improve.

The Primal Passions Club, also known as Castle Primal Passions, first opened in November 2014. Rayven and her partner Coeles Tentigo offered the place as an adult-themed club were residents could feel free to indulge in erotic fantasies. In March 2015, the club was moved to the Sunweaver Estates. Besides it's regular events, there were several band tributes at the location, such as an AC/DC tribute that raised 30,000 Lindens for Team Sunweavers in the Relay for Life. Rayven was also the top model bid for in Nydia Tungsten's Angels Calendar Auction for 2015.  The castle would also be the scene for music video filming, as well as birthday parties. Twice it was the location for Nydia Tungsten's "Twisted Christmas" DJ events. The club had gotten praise over the months for it's design.

Despite these events, overall attendance just wasn't high enough. Now, just a bare spot exists where the castle once did. All that are left are the memories of the club that added to the history of the Sunweavcr Estates during the time it was here.
Posted by Bixyl Shuftan at 6:01 AM